I’ve been slacking in the blogging department! I have a couple unfinished posts hanging out in the wings, but we’ve been busy packing and preparing for vacation next week. I’ve had several photo sessions to wrap up on top of work, church, and plenty of other activities. I’m not complaining – it’s been exhausting but I wouldn’t have my life any other way!

One thing that has made the past two weeks incredibly difficult is that my CGM has suddenly become completely inaccurate. I had great luck and accuracy through June, July and the beginning of August, but recently it’s taken a nosedive.

Example: last night at bedtime I was 116 on my meter and 116 on my CGM. Calibrated and went to sleep. Woke up 4 hours later to a threshold suspend and a CGM reading of 53. I did a meter check and was actually 153. I figured, maybe I was sleeping on my CGM sensor, which can cause inaccuracies, so I rolled over and went back to sleep. An hour later, it is freaking out again, saying I was now at 40. I got frustrated and shut it off for the night. 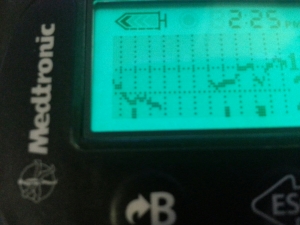 This morning, I restarted it again and calibrated on a nice 137 at my most steady part of the day. By lunchtime, CGM was showing a spike to 190 and then it straight lined up there. However my meter test was 132. There was no way I was actually 190, and also no way I had dropped from 190 to 132 in the lag between meter and CGM.

This has been the story of my life for the past 2 weeks. I’ve tried different CGM locations (I actually moved to the “approved” area of the body – the stomach – as opposed to my preferred area – my arm – to see if it would help). I’ve calibrated more, I’ve calibrated less, different times of day, etc. Nothing has helped. 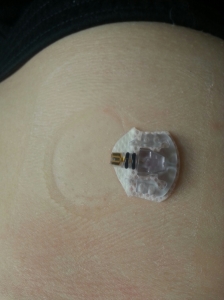 Dearest readers, should I call the company and sit on hold for potentially an hour or more to try to talk to someone about my frustration, and have them take me through the same troubleshooting steps I’ve already been through and see if it helps at all, or should I just keep trying to make it work? I don’t have the money to pull a sensor prematurely and waste it since my insurance company STILL won’t call me back to pay my outstanding claims (so I’m STILL unable to get more supplies at this time).