Flying with an Insulin Pump

My vacation a couple weeks ago was my first time travelling with my insulin pump. I’ve been pumping with the Medtronic 530G since December 2013. There was a bit more preparation for travelling with the pump, but overall I had a very good experience and wanted to share a little of what happened to me, and what to expect for those who haven’t air-traveled with a pump.

The first thing to keep in mind is that diabetes doesn’t play fair. Just because you will be gone for 2 days doesn’t mean that you don’t need to pack insulin and site change supplies. For my 5 day trip, I packed two vials of insulin, two separate blood sugar meters and their corresponding test strips, and enough supplies for three site changes and two CGM changes, and their insertion devices, overtape, band aids, and the list goes on.

Was all of it necessary? Absolutely! A site could have failed, a vial could have been dropped and broken, etc. I split the site change supplies between my carry-on bag and my suitcase so that way if I lost my luggage, I’d still have some supplies with me. (Insulin, of course, was in the carry-on).

We left a day early and spent the night in Chicago. I was worried because we had to get a hotel with a fridge/freezer for my insulin, which cost us a bit extra, but was worth it of course. I was able to re-freeze my cooler pack in the freezer part and keep my insulin cold in the fridge. (This is the cooler pack I used for my insulin – I found it stayed quite cold for several hours longer than advertised!) Don’t forget, do NOT pack your insulin in your luggage! It needs to be carried on for so many reasons. Just trust me. 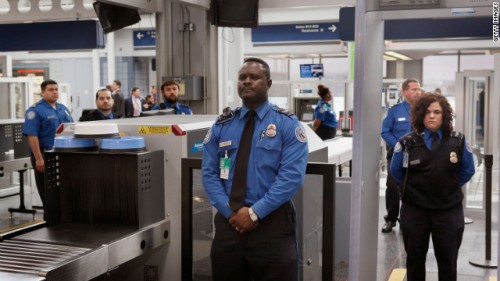 The TSA looks so scary, but I promise they aren’t!

I told the first TSA agent I got to at Midway that I needed to be wanded because I couldn’t go through the scanner. They informed me that I would have to have a full body pat down instead of a wand check. I was worried, but honestly I had nothing to worry about. The lady sent my items through the scanner, and led me around the body scanner to a sectioned off area. She asked if I wanted a private screening, and I opted for the public one. She explained exactly everything that she would be doing prior to starting – where she would touch, where she was going to use the backs of her hands, etc.

She was thorough, but I didn’t feel violated or anything in the slightest, even with it being a public screening! Everything occurred over the clothes and I didn’t feel it was intrusive. Overall, it was a positive experience!

The lady who patted me down at the Ontario airport was also very friendly. Not as thorough as the lady at Midway, but still very good. Granted, it was like 5am local time so I can’t blame her for being quick – she was probably at the end of her shift or something. 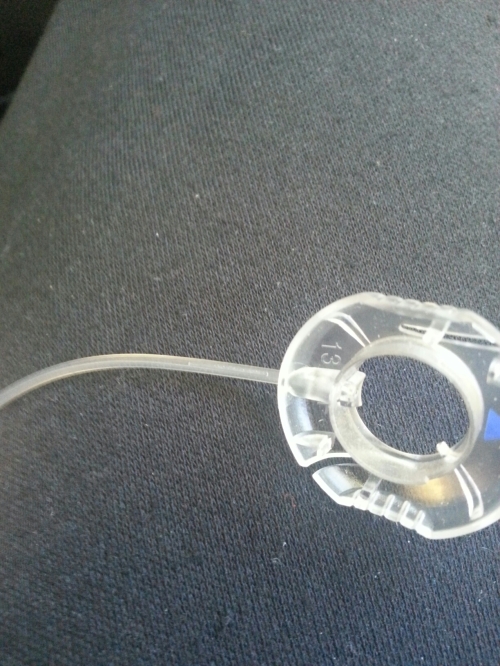 It’s hard to see, but this is my tubing between takeoff and maximum elevation. Notice the bubble? Yikes! Luckily I had read this post and knew that I needed to suspend and disconnect during the elevation change. Point proven! I manually bolused out the bubble before reconnecting, but I’m sure there’s a better way to get it out.. possibly re-priming? It was only a unit or two, so it wasn’t a big deal for me to do it like I did.

I also disconnected on coming down into California, and I had a drop of insulin that came out of the end of the tubing that would have gone into my body had I not disconnected! I was already low upon landing, so I was glad that I didn’t have that extra, unaccounted for insulin floating around in me and making me go even lower.

The first 2.5 hours of our 4 hr flight, the turbulence was so bad that the seat belt lights stayed on and nobody could get up. The flight attendants couldn’t even bring around drinks. Luckily, I had plenty of smarties with me (I opted not to carry juice due to the extra trouble it would have probably caused with the TSA).

I was disconnected for about a half hour for both takeoff and landing, and normally my sugar skyrockets if I’m suspended for more than 15 minutes but because of adrenaline / elevation / whatever else, my sugar dropped and when Frank picked us up, I immediately knew when I sat in his car that I was low. It ended up taking multiple packs of smarties to bring me into range. So, be sure to have low snacks on hand!

I think that covers everything! If there’s anything I missed or you have specific questions on, leave a comment and I’ll try to address it!

3 responses to “Flying with an Insulin Pump”