Today I ran my third 5K of the year!

It was a small local town race, so it wasn't chip timed, but it was inexpensive and I didn't have any other plans for that day, so I signed up a couple weeks ago and have been running a bit here and there to prepare.

What I didn't prepare for was the awful rib cramp that would hit me at 0.5 miles and never relented.

This race was really hard mentally. I was fine for the first mile other than the cramp. I knew my friends Chris and Chris (for sanity, I'll refer to them as Little Chris and Other Chris) were a ways ahead of me but I was racing my own race at my own pace and feeling okay with it.

But when I was approaching halfway, I saw a guy laying facedown in the grass next to the road. He was still a ways up from me, but he was wearing a white shirt, dark shorts, white socks, and had short dark hair. He looked EXACTLY like my friend Little Chris. I started to panic as I watched two people try to pick him up off his face and he was completely limp. There were sirens in the distance coming our way. However, as I got up to him, ripping my earbuds out and about to freak out, I finally was close enough to see that it was someone else and NOT Little Chris. Phew!

That scare threw me off my mojo. The next stretch was full sun, and I took a water bottle when I shouldn't have. I came up to around the 1.75 mile mark where I knew Allen, Little Chris' Grandma, and Other Chris' wife and kids would all be but I was dying and didn't even look for them. Turns out only Allen was there because Little Chris was crossing the finish line at the same time. Oh well!

The rest of the race I battled my rib cramp along with a shoulder issue as well. I passed the same lady back and forth probably 97 times throughout the entire race and that was motivating to me.

When I rounded the final corner and could see the finish line in the distance, I burst into tears because I was SO done at that point. The cramps were killing me, I wasn't going to make my goal time, and I was relieved that I was almost done. After I finished, I walked off by myself to decompress for a bit before rejoining my friends.

After the race there was a raffle. I was joking around that the only way I'd ever win a race was by winning a raffle AT a race. What do you know, I ended up winning a bag of hair products that was worth more than my entry fee even was! I'll gladly take it. Then we all went to Little Chris' house and his Grandma made us all brunch. It was an excellent day!

Am I slow? Yep, sure am. Back of the pack represent! I was initially bummed about my time until I realized that I was only 6 seconds off my pace from my first 5K that I had properly trained for two years ago. I also killed my times for both of the other 5Ks I've done this year. Talk about encouraging!!

My blood sugar was decent for the beginning of the day, but about 10 minutes before race time I was hit with a crazy adrenaline-fueled high. I saw it coming, so I corrected and ran with insulin on board, which I do not like doing. I felt better knowing that I had glucose on me, that I'd be passing by Allen a little after halfway, and that he was also tracking me through iOS. (Thank you iPhone for the fantastic Share My Location feature!) I peaked at mile 2 with a BG of 230 and ended the race at 165.

I only am signed up for 1 more 5K this year, a virtual one in September, but I'm hoping to do another one or two before it gets too cold (it feels wrong to say that in July!) 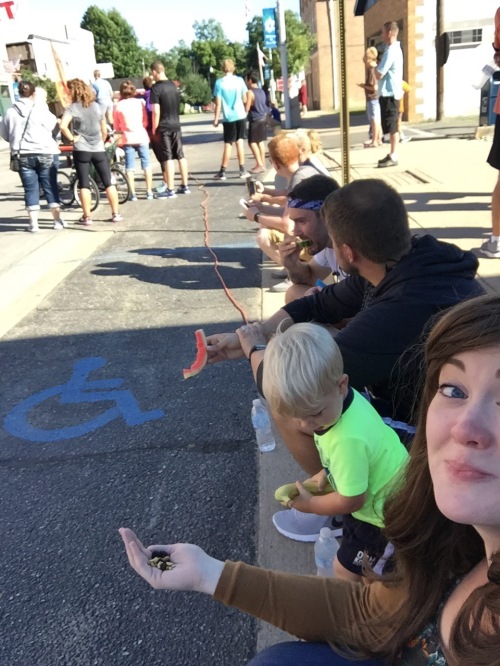